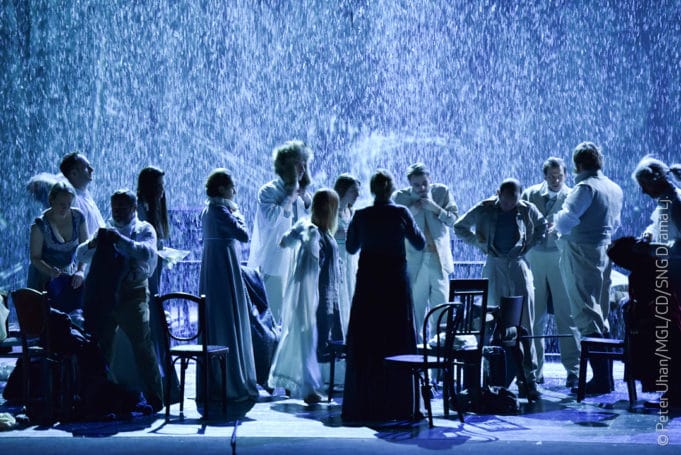 The CD Cultural and Congress Centre presents, produces, co-produces, organises and provides cultural and artistic, congress and other events, state commemorations, exhibitions and festivals. They hold a key role as a central Slovenian congress centre and with their versatile cultural, artistic and scientific events, including the latest production of War and Peace, they contribute to Ljubljana becoming one of the most significant European cultural and congress centres destinations.

The War and Peace production is not solely a direct translation of the story into theatre form, but a special way of interpretation of the work. Director Purcărete has created a show seen as a kind of theatrical exercise where players switch between roles and scenes. The travelling scenic elements in the first part of the stage are removed in the play’s second act, revealing the withdrawn painting ‘magnificence’ of the war to expressive artistic gestures of director. All this complexity was possible to conceive and realize only due to the remarkable technical capacity of CD Congress Centre’s versatile Gallus Hall stage.

The large production and artistic team makes the show work: 6 stage masters and technicians, 3 light masters and technicians, 1 video designer and assistant, 2 sound engineers, 1 Head of Performances, 3 people taking care of the props, 4 wardrobe masters for more than 75 costumes, 3 hair and make-up stylists, 96 suppliers provided the materials needed for the manufacture of set design, costumes and masks as well as the purchase of props. Special effects in the show are theatrical and atmospheric fog, a bottle-breaking and two snow-making patents. The latter required around 150 kg (or 7 cubic feet) of artificial snow. A stage capable of miraculous transformation, Gallus Hall has thus solicited active involvement from the actors who strive to make Tolstoy work in a unique and modern way.

The message of the play is that the basic phenomena in human life are universal. Or like Purcărete said:

“War and peace, the subjects that we address here, are made of the same stuff. One doesn’t exist without the other. Peace is born out of war and thus inherently contains its seeds”