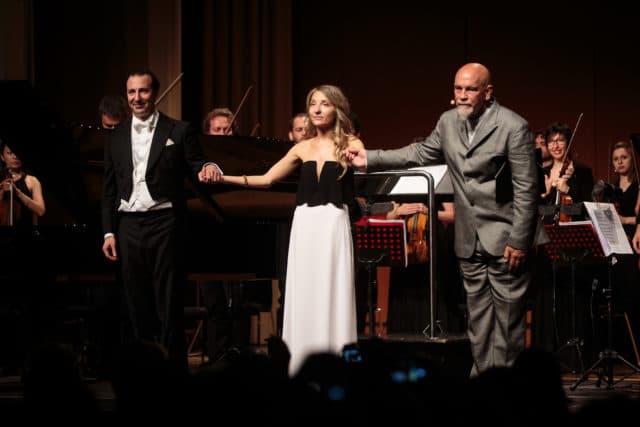 A musical spectacle featuring one of the most prominent Italian chamber ensembles, the I Solisti Aquilani, and special guests was held in the Grand Union Hall as part of the 65th Ljubljana Festival. The guest appearances included the renowned American stage and screen actor, director and producer John Malkovich.

The first part of the concert saw a performance of Shostakovich’s String Quartet No. 8 orchestrated for string orchestra and given the title “Chamber Symphony” by Rudolf Barshai. Following this, the internationally successful Slovene violinist Lana Trotovšek performed the Bach Violin Concerto as a soloist.

The second part of the concert was then an exciting fusion of Schnittke’s Concerto for Piano and Strings with a careful selection of texts from the chapter “Report on the Blind” from Ernesto Sabato’s novel On Heroes and Tombs. In this part, I Solisti Aquilani and pianist Anastasya Terenkovi were joined by John Malkovich, who recited excerpts from the aforementioned novel that he chose himself and could watch the music and text organically intertwine in a way that the voice did not overwhelm the music.

After the outstanding performance, the musicians headed by Mr John Malkovich gathered at the Restaurant and Bar Atelje, where a wonderful culinary journey was prepared for them. Mr Malkovich, visibly impressed by Atelje’s exquisite cuisine, was served Mohant cheese-and-nettle ravioli, chanterelles and truffles as a starter, then for the main course lamb, tarragon, smoked yoghurt, kimchi and garlic. He reserved special praise for the Slovenian wines, especially for the Cabernet Sauvignon that was served during the dinner.

Despite the fact Mr Malkovich wasn’t able to echo some of the classic clichés about the beauty of Ljubljana, as he claimed that for him the tour was work rather than an opportunity for sightseeing, it was clear from what he wrote in Union Hotel’s guest book that he will gladly return to Ljubljana on another occasion.