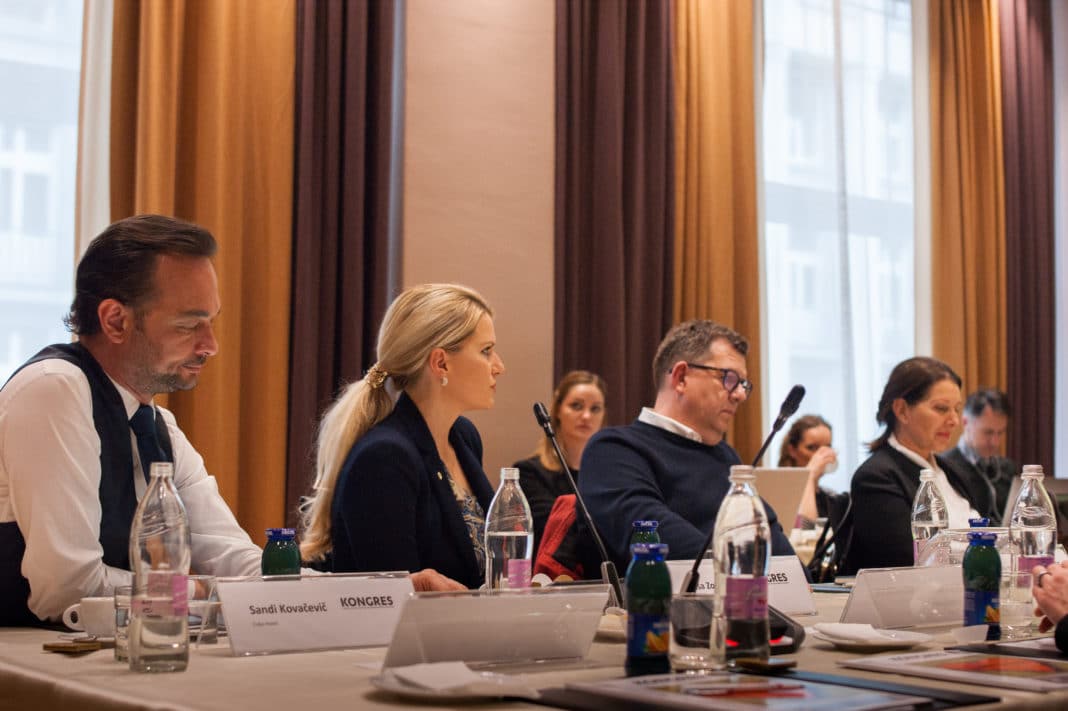 At the end of March 2018,  a little piece of history was created. The 10 ‘knights’ of the Slovenian congress scene gathered for the first time at a roundtable and discussed the past, present and future in the development of the congress industry in the Ljubljana region. In order to reach an objective and present a holistic view, it is necessary that all the angles and positions are represented, and that every voice is heard. And so, the ‘knights’ sat at the table and, for the first time, shared their thoughts about the congress scene in Ljubljana. The discussion was led by the editor-in-chief of Kongres Magazine, Mr. Gorazd Čad, who has been a very active observer, co-creator and critic of the congress industry in Ljubljana for over a decade.

A platform for constructive debate was created, and many thoughts and opinions were discussed. The participants jointly observed that, as a congress destination, Ljubljana has made significant advances in the past decade. Ten years ago, for example, when meeting international buyers, the professionals from Ljubljana’s meetings industry had to take along a map of Slovenia to show where Ljubljana was actually located on the world’s map. However, since then, the Slovenian capital has transformed from a small, relatively unknown city to a world-known congress destination.

Ljubljana’s recognisable brand has mostly been founded on the destination’s firmly established characteristics as a boutique, green and sustainable city. Furthermore, in addition to the already interesting event locations, in the past few years Ljubljana has become richer for some world-known hotel brands that have added to its recognition. It is for these, as well as many other reasons, that Ljubljana’s identity has been widely acknowledged. However, the city is not resting on its laurels and is continuing to work on improving its identity even further.

In order to continue the successful congress path, the participants agreed that stakeholders in Ljubljana need to be in a synchronised partnership on a daily level. Mainly, co-operation between congress providers and the City of Ljubljana is necessary when bidding for international congresses because providers not only sell their congress halls but also sell Ljubljana as a product. In addition, the connection between the economic and educational sectors has also proven to be crucial in improving the development of congress tourism in the Slovenian capital. At the same time, it is important to work together as much as possible to bring events to Ljubljana throughout the whole year, not just in the high season. It was agreed that in order to strengthen the meetings industry in terms of prolonging the season, there needs to be a targeted promotion involved.

Co-operation is also a necessity for the creation of attractive and unusual events; only this way can event planners succeed in preparing attractive events. It was emphasized that this is particularly important because a new MICE era is already here. Its main characteristics are in the ‘out-of-the-box’ approach, with creative, attractive and unusual events and venues. Furthermore, the participants agreed that in order to be in accordance with the new demands of the MICE industry, it is not only important to follow the trends, but, even better and even more important, to actually set and design them. Additionally, more lobbying, resources, courage and foresight is required as well as being tuned into the wishes of the local community to achieve a return on investments.

Synchronised work with partners on a daily basis is of vital importance.” – Saša Zor, Intercontinental Ljubljana

“Co-operation between congress providers and Ljubljana is necessary since, when acquiring an international congress, PCOs not only sell congress halls but they also sell Ljubljana.” – Špela Terpin, GR – Ljubljana Exhibition and Convention Centre

This approach is of the utmost significance, particularly now when the ‘Generation Z’ is on the move and will soon represent an influential part of the meetings industry. The key attribute of post-millenials is that they have been using the internet from a young age and they are generally comfortable with technology and interacting on social media. Therefore, their demands and expectations are of a different nature from those that the MICE industry has been used to.

[vc_cta h2=””]“We are doing everything to have events in Ljubljana throughout the whole year, and not just in the high season.” Jan Oršič, CVB Ljubljana

“As professionals in the meetings industry, we should not be focusing on the obstacles, but rather on the challenges.” Breda Pečovnik, Cankarjev dom – Cultural and congress centre[/vc_cta]

Thus, it is crucial for Ljubljana to be ready for this new generation, also in terms of new technologies in the event industry, and the city must have an ear for new creative solutions that stand out and can attract the upcoming generation rising inside the meetings industry. The goal is not only to attract congress guests to stay in Ljubljana for a longer time, but also to get them to return.

Finally, the ‘knights’ at the roundtable concluded that it would be their dream if the meetings industry in Ljubljana was so developed and coherent that the whole city would ‘live and breathe’ the hosted congress scene. There is still work that needs to be done for this to be achieved, however, what is important is that when taking this path, every professional in Ljubljana’s meetings industry should not be looking at the obstacles along the way but rather at the challenges ahead that will aid the continuous development of Ljubljana at the same tempo as in the past decade. This way, the roundtable agreed, Ljubljana will without a doubt become a world-known congress destination. The successful roundtable of important stakeholders in the Slovenian congress scene was the first of many more to come in the near future.