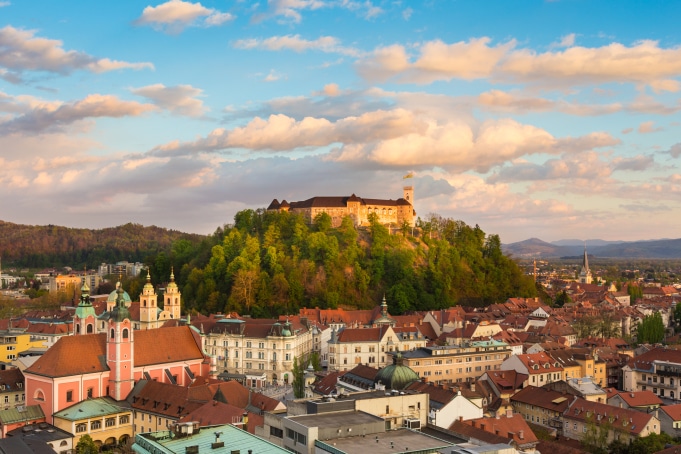 All flights to and from Ljubljana are operated through the Ljubljana Jože Pučnik Airport, which is located at 25 km from the city centre. Adria Airways, Slovenia’s national carrier, operates per week around 200 direct scheduled flights from Ljubljana to 20 destinations, mainly in Europe.

If you are travelling by car or train, it is good to know that Slovenia’s road and rail network have been modernised over the past decade in order to provide an efficient transport system, integrated with the broader European area and specifically the neighbouring countries. Railway connections from Ljubljana to the major cities across the borders are often operated by intercity trains.

The public city bus network makes it easy to travel within the city. Ljubljana also has a well-organised taxi service, which is not exceedingly expensive and Bicikelj, a city bike system enables you to travel freely by day or night.

Ljubljana provides a good range of accommodation facilities (4-star and 3-star hotels). Additional units are available in pensions, bed & breakfast, tourist apartments, youth hostels and private rooms. Several hotels are centrally located and are either within walking distance or up to 6 km from the Old Town.

Both Ljubljana’s city centre and suburban districts boast a wide variety of different restaurants, whose culinary styles include traditional Slovenian and numerous other national cuisines. Particularly well represented are Balkan, Italian, Central European and, since recently, a variety of more exotic cuisines. One of Ljubljana’s specialities is that also numerous high-end restaurants offer a selection of special lunchtime menus at favourable prices and a wide selection of high-quality wines from around Slovenia.

Locals and tourists also like to visit The Open Kitchen, a food market where one can experience the delights of freshly cooked food prepared by different Slovenian chefs right there in front of them, on the market stalls.

On Fridays from mid-March to October, the Open Kitchen at Pogačarjev trg square offers a wide and varied offer of culinary specialities and is a must try experience for those who enjoy good food and company.

Time machine at Ljubljana castle
A historical experience you will never forget. Discover the roles of the Castle Hill and the Ljubljana Castle throughout the castle’s rich history. The costumed characters representing each period will create a genuinely special atmosphere, which will be both instructive and entertaining.

Baking Potica – a traditional Slovenian cake
Under the guidance of Grand hotel Union chef Janez Dolšak, who heads the Slovenian national cooks’ team, participants learn to bake the potica. This traditional cake, found in almost every home during all major holidays, is prepared with a variety of fillings, the walnut one being among the favourites. The culinary experience that will take about 4 hours is ideal for groups up to 12 people.

Sea kayaking on Ljubljanica river
Enjoy the capital city of Slovenia – Ljubljana from a different perspective. Take a boat and a paddle and explore the city by water. The 2 hour trip will take you from Livada pass Tromostovje to Ambrožev trg.

Escape the barn
Escape The Barn is an “escape the room” type of an immersive game, but with a big twist. Unlike typical escape programs, the event takes places within a larger event venue, it can accommodate up to 70 people, it can be branded and storified, it includes food, beverage and (in some versions) even live actors. Escape The Barn is a unique incentive experience that guarantees a memorable and fun experience for any group.

Experience the roman Ljubljana
The remains of Ljubljana’s predecessor, the ancient Roman city of Emona, can still be found right in the city centre. Dressed in Roman attire, guests can experience a tinge of its past history and lifestyle in the company of an Emonan citizen and a Roman legionary.

Ljubljana open market
Yet another of Ljubljana’s charms is its many public markets where one can buy fresh and genuine produce directly from the farmers, herbs and fresh flowers or souvenirs, art pieces and handicrafts from Ljubljana and Slovenia. Infused with colour and fascinating smells, not to mention fabulous architecture in the case of Plecnik’s collonade, the city’s street markets are a major attraction and a great open-air venue.

Ljubljana castle
A mighty medieval fortress, a symbol of the Slovenian capital Ljubljana is an interesting tourist point, the idyllic grounds for long strolls and a perfect venue for a special event just a glance away from the lively city centre. Guest can access the castle by car or by the funicular railway that connects the castle with the old town. The Ljubljana castle is great venue for different indoor or events that especially popular during the summer time. The Castle’s courtyard can fit up to 800 people, while different halls in the castle can fit from 35 to 440 people.

Diners Golf & Country Club Ljubljana
At Diners Golf & Country Club Ljubljana business events get new dimensions. Golf course Diners Ljubljana is the most modern equipped private golf course in Slovenia, just 10 minutes drive from the airport Brnik and from the city center. It is an ideal venue for incentives as well as meetings and seminars. The club’s meeting hall seats up to 70 people. The catering is taken care of by the experienced chefs from the Evergreen restaurant.

The Walnut grove
The venue has an amazing location in the nature, just 2km from Ljubljana’s main shopping centre, but with an authentic feeling of the Slovenian countryside. The main attraction of the venue is the ambience, which is best described as eco-chic & vintage. As a former horse ranch, the venue has several farm buildings that have been up-cycled and re-polished in a unique style. The cherry on top are the in-house catering service (specialized in live cuisine) and event planning/incentive agency.

1. Take a day trip to Ljubljana Moors
No more than a few steps from Ljubljana’s last suburban streets spreads the Ljubljana Moors. This almost 16,000 hectares large marshy plain is marked by an interminable mosaic of grasslands, litter woodlands, fields, ditches and hedges. It is a place of serenity where the black palustrine soil sucks up the city bustle and the obstinate moor mist lifts a spell from the human’s presence. Ideal trip for those who have a car and two days to spend.

2. Experience urban fishing
Treat yourself to some serious fishing without having to leave the city. Ljubljana is one of the few European capitals offering good opportunities for fishing only a short way from the city centre. At the Ljubljanica Fishing Resort located between the Ljubljanica Sluice Gate and the point where the Ljubljanica empties into the Sava you can find a large brown trout, grayling, huchen, and pike. You can also enjoy ground fishing for barbel and carp or natural bait fishing for chub, common nase, and Danube roach.

3. Visit the Ljubljana Festival
Ljubljana Festival is the biggest, oldest and most important festival in both Slovenia and the wider region. Over the years, it has become a way of life during the summer holidays for residents and visitors of Ljubljana alike; and for visitors not only from surrounding countries but from far beyond as well. With its colourful cosmopolitan spirit, the festival contributes a great deal to the life and energy of the Slovenian capital, itself considered one of the liveliest cities in Europe. In its 61-year history, the festival has hosted numerous internationally recognised and celebrated names.

4. Explore the Old town
The historical city centre well known for its unique architectural appearance, which is the result of the legacy of the Baroque and Art Nouveau periods and, most notably, the work of the famous 20th century architect Jože Plečnik, can easily be explored on foot. Start at the Triple Bridge, visit Ljubljana’s Central Market and make your way to Ljubljana Castle to enjoy the most beautiful views of Ljubljana. Don’t forget to take a peek into the Town Hall and to take a stroll down Ljubljanica river embankments where lively cafés offering outdoor seating are perfect for a short break before further exploring the city’s hidden treasures.

5. Find out who is Jože Plečnik
Jože Plečnik (1872-1957) was a famous architect that tried to model Ljubljana on ancient Athens. The multitude of his creations in the city, referred to as a whole as “Plečnik’s Ljubljana”, is considered to be one of the 20th century’s most important total works of art. Plečnik’s best known works can all be explored on foot or by bike and include the National and University Library building, the Ljubljanica river embankments and bridges, the most notable among the latter being the Triple Bridge and the Cobblers’ Bridge, the Central Market, the Križanke Summer Theatre, the Bežigrad Stadium, the funeral home at the Žale cemetery.