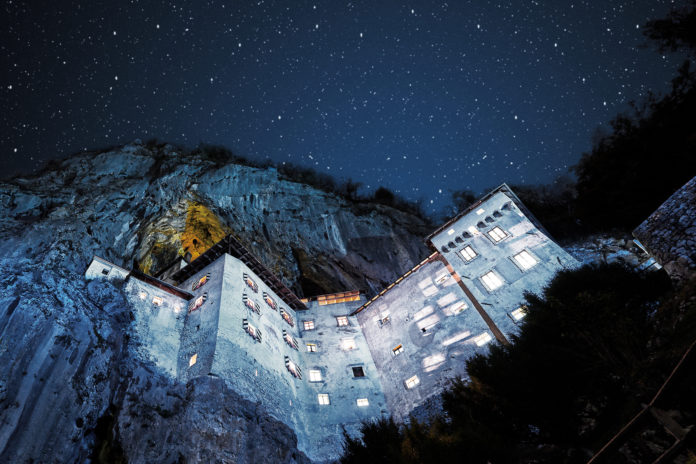 Did you know Slovenia has the biggest cave castle in the world? A stone’s throw from the famous Postojna Cave, the karstic landscape offers another spectacular setting and a trove of experiences in the fairytale style of the knights. With its fascinating location and extraordinary condition, the Predjama Castle, built into a majestic cliff, has been exciting visitors for over 800 years.

The charming medieval stalwart exemplifies the wondrous interplay of human aspirations and nature’s creativity, whispering stories of times long gone, when the songs of the troubadours were often cut short by the clamour of swords and thundering hooves of the Lipizzaner. It’s no wonder that the Predjama Castle, with its beauty and true uniqueness, is considered among the ten most famous castles on the planet. Accessed through a hidden tunnel, the karstic cave system weaves kilometres below the bastion, which rests against a massive rock formation featuring several natural entrances to the Kras underworld, a subterranean network of tunnels and halls. In total, the cave system is some 140 kilometres in length, making it the second largest in Slovenia. The explored section features the mythical Erasmus Tunnel, an underground passage leading to freedom in the direction of the Vipava Valley.

Veil after veil, the spectacular fortress reveals the visage of centuries past and the legend of its most notorious master, the robber baron Erazem Lueger. The rogue knight was famous not only for his reckless bravery, but also for the banquets held in his rocky fort. In spite of being “trapped in his own castle” and constantly under siege, secret tunnels provided Erazem with various treats, like delicious lamb during Easter and fresh fish from the Adriatic, with juicy Vipava Valley cherries on the side in the early summer. The stirring views, historical mystique and murky corners of the fortress provide a great vantage point for themed Medieval experiences. How about a knightly tournament where you can become an archer, swordfighter or jouster, royalty or food taster for a day? A spectacular re-enactment of a different age, leaving epic memories in the minds of the visitors.

In the warmer months, the castle and its vicinity are always lively, and in the winter serene, resting like the colony of bats spending the cold season in there. Once a brilliant hideout, the cave under the castle now offers a range of thrilling adventures. Dare to strap on some caving overalls, tall rubber boots, helmet and headlamp and venture deep underground? No worries, the subterranean expeditions are led by experienced guides.

If adventuring isn’t your preferred cup of tea, you can always explore the castle and its surroundings with a camera. The Predjama Castle has already impressed film directors and writers of world renown, while the Discovery Channel even found some ghosts in there. Come and peek through a window in history, into the distant past of the Predjama Castle and the mysterious world of the Kras.

Five Reasons to Meet on the Sunny Side of the Alps

The Autumn Shine of the Mediterranean and the Kras