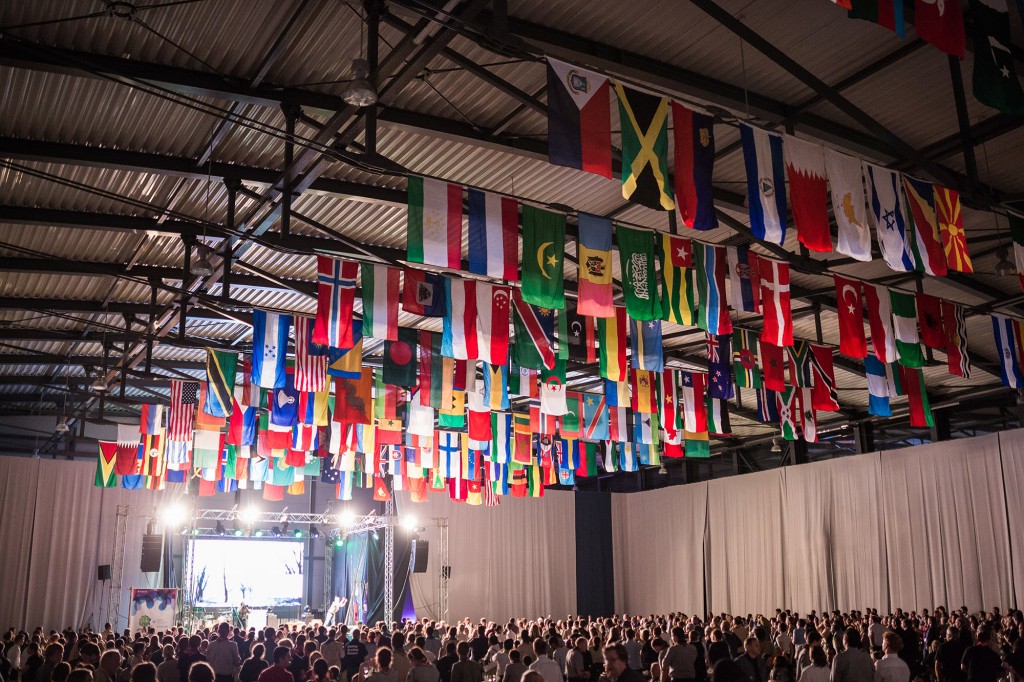 14th Congress of European Association of Agricultural Economists in Ljubljana

27.08.2014 15:40
From 26 to 29 August 2014, GR – Ljubljana Exhibition and Convention Centre hosted the 14th Congress of European Association of Agricultural Economists. Nearly 700 participants from 49 countries attended the EAAE congress that was in previous years hosted by some of the biggest European cities. Having the size and complexity of the EAAE congress in mind, Slovenian Association of Agricultural Economists in cooperation with GR-Ljubljana Exhibition and Convention Centre and GO.MICE – professional congress organizer prepared a winning bid that in the beginning of 2011 persuaded the European Association of Agricultural Economists.  After Zurich in 2011, Ljubljana proudly became the host city for the EAAE Congress in 2014. Dr. Aleš Kuhar, University of Ljubljana – Biotechnical Faculty and the organizer: “After more than two years of preparations which in the last six months required an intensive co-operation with the professional organizer, congress venues and PCOs, I can say that the team has done a great job. The feedback we got from the participants was extremely positive.”

Professional organizers were pleased with the quality and the number of scientific articles presented over the four days of the congress. A varied and carefully thought-out social program was prepared for the participants. The highlight was the “Down-town get-together” held at Pogačar Square and farewell dinner called “Walk through the Slovenian culinary and wine regions”. The catering was entrusted to master chefs of Kaval Group. Špela Terpin from GR explained: “We were pleased to host the congress with more than 600 participants coming from Europe and other parts of the world. Since participants are agricultural policy makers, special emphasis was placed on the presentation of local agriculture. The local cuisine served on the platform of the GR – Ljubljana Exhibition and Convention Centre was accompanied by a performance of indigenous Lipizzan horses.”

12 exciting study tours around Slovenia related to the congress topics were offered. For most of the participants this was a unique chance to explore different parts of Slovenia, meet Slovenian producers of wine, beer, cheese, meat and experience countryside and hospitality of local people.

Participation has exceeded all expectations when nearly 700 participants from all around the world attended the congress. Majority came from Italy, Germany and France, while participants from Brazil, Australia and Africa also attended the congress. Although the organization was a challenge, at the end all ran smoothly. Natalija Bah Čad, project manager at GO.MICE – professional congress organizer: “When we started to plan the congress we made a “pessimistic” projection for 450 to 600 participants. So, we are glad to exceed the numbers. Rooms were reserved in most of Ljubljana’s hotels well in advance. Although it is a high congress season in Ljubljana and hotels are fully booked, we have managed to make the last minutes bookings.  We are happy all went as planned but most of all that we got very positive impressions about the city and the congress venue from participants.”

27.08.2014 15:42
The World Organisation of the Scout Movement – WOSM has in early 2011 selected Ljubljana as the host destination for its 40th jubilee World Scout Conference.  Over 1200 delegates from 130 countries attended the event from 11 to 15 August 2014, which makes it not only this year’s largest congress in terms of delegate numbers, but also the most international event ever held in the capital and Slovenia. The conference venue, GR – Ljubljana Exhibition and Convention Centre, offered an excellent space flexibility to accommodate the main programme, whilst some parallel events staged in the city centre were also open for the public. The World Scout Conference (WSC) takes place every three years. Ljubljana became its proud host after Brazil, Korea, Tunisia and Greece through the efforts of the Slovenian member of the World Scout Movement – The Scout Association of Slovenia. In January 2011, the members of the association convinced the majority of the 162 member states that Ljubljana was the next most appropriate host for the conference, thus overcoming its difficult opponent for the year 2014 – Florence.

Ljubljana Tourism and its Convention Bureau started the ongoing cooperation with the national scout association from the earliest stage of the bid preparation four years ago and also the City of Ljubljana lent its substantial support  in the event’s organisation. Tatjana Radović, Ljubljana Tourism/Convention Bureau, explained: “We cooperated in the bid strategy, liased with the local partners / suppliers to ensure Ljubljana would provide a competitive offer, supported the numerous promotions that the national scout association performed abroad throughout the year 2010, supported the bid presentation in Brazil in early 2011, site visits and kept in contact and reacted to the necessities of the local host committee whenever needed till the D-day. “

The opening ceremony of the conference received the patronage of the President of the Republic of Slovenia, Mr Borut Pahor, who addressed the delegates from around the world.

The World Organisation of the Scout Movement – WOSM is the world’s largest educational youth movement, bringing together primarily young people. Nevertheless, the attendees of the conference are mostly middle aged and are successful and renowned individuals, entrepreneurs, businessmen, politicians and academics from all fields. Among the distinguished guests who were present at the conference a special mention goes to the United Nations Secretary-General’s Envoy on Youth, Mr Alhendawi Ahmad.

The goal of the conference was to examine the operational guidelines of the Scout Movement throughout the world, to establish a policy of the global organization by 2023 and to adopt the measures necessary for the purpose of strengthening the movement.

The participants of the conference were also able to attend a varied programme of accompanying events, some of them open for the public. Thus, scouts’ workshops for children, a presentation of scouts’ activities and games followed by scouts’ bands performances took place at the central Congress Square during the WSC in the afternoon and evening hours.

Additionally, an open air exhibition of scouts’ photos “Youth in nature”, opened by the Mayor of Ljubljana, Mr Zoran Janković, was on view at the central promenade in Tivoli Park. All in all, Ljubljana really breathed in unison with the international scout community and proved to be a most hospitable destination. Tatjana concluded: “In numbers, the WSC 2014 generated around 8,000 overnights mostly in 3- and 4-star hotels, which for Ljubljana is quite a high number from a single event. The media coverage was also very good, and this congress was definitely one that attracted the wider attention of the local residents and was really felt in the city. The local Host team with all the volunteers invested an enormous amount of energy and time into this project and made a terrific job. No other word than – respect!”

27.08.2014 13:11
Tesla Motors Europe in cooperation with the Avant Car company recently built first superchargers for Tesla S models in Slovenia. First and at this moment also the only Tesla superchargers are located at the upper car park of Four Points by Sheraton Ljubljana Mons hotel and can be used free of charged.

These chargers are known as the most powerful chargers for electric vehicles worldwide. It is possible to recharge the battery of Tesla S for 500 kilometers of driving. Charging time is between 20 and 40 minutes. Chargers operate with the power of 135 kilowatts and they use 100 % clean electrical energy from the Elektro Celje Energija, electricity provider in Slovenia.

Superchargers add convenience for owners travelling from central European countries towards South. It is the first of several Superchargers that Tesla Motors Europe is planning to open soon in Europe until 2015 to support long distance travel and convenience charging free, for life.

About Four Points by Sheraton
Experience smart travel. With over 200 Four Points hotels in more than 30 countries, travelers can find the timeless style and comfort they’re looking for with genuine service and everything that matters most, all around the world. From Santiago to Shanghai and Milan to Milwaukee, Four Points hotels can be found in big urban centers, by the airport, near the beach, and in the suburbs. A recent $1 billion invested in renovations, conversions, and new-build hotels has made the brand stronger than ever. Four Points by Sheraton, like all brands within Starwood’s portfolio, is proud to offer the Starwood Preferred Guest® program, the industry’s richest loyalty program. To learn more, visit www.spg.com.

27.08.2014 13:10
Next to being a great hotel for meetings and events, Austria Trend hotel is getting more and more recognized as sport hotel as they host several sport teams and events on the highest level.

As they hosted the world known English football club Chelsea at the end of July, which is owned by Russian billionaire Roman Abramovich, they took their references on another level. Chelsea came to Ljubljana to play a friendly game against home town club Olimpija. During their visit they have stopped in Austria Trend Hotel to prepare for the game, enjoy in comfortable atmosphere and get some rest before playing. One could say Austria Trend superb culinary helped them to get a victory that evening, as the game in Stožice Arena ended with their victory 2:1.

The hotel itself established a unique program “Ljubljana – City of preseason games” in which all sport teams can come to Ljubljana to participate at friendly games before the start of the season, which are organized by professional Austria Trend Hotel staff. In the beginning of September they are expecting arrival of basketball club Zielona Gora from Poland which will have preparation for the new season in Ljubljana.

In October another event of European biggest martial art organization, the Final Fight Championship, is expected to be organized in Ljubljana, and Austria Trend Hotel will accommodate the best fighters from whole Europe again.

In November new season of Eurocup basketball is starting and also this year Austria Trend Hotel will host all teams playing against home favourite Union Olimpija in beautiful Stožice Arena where Eurobasket 2013 was held.

27.08.2014 13:08
First annual conference for principals of all Slovenian schools and kindergartens: Educational leadership – Reality or Illusion

The National Education Institute organized the first annual conference for principals of Slovenian schools and kindergartens with a meaningful title – Educational leadership – Reality or Illusion. The conference took place on 20 August in Terme Čatež.

The event was attended by over 330 principals and representatives of various institutions in the field of education. The participants were greeted by the Minister of Education, Science and Sport. The conference served with many presentations from international guests like Norman Emerson, Scottish expert on curriculum and assessment, Vinko Logaj PhD, director of the National Education Institute (Developmental Work of the N. E. Institute), Stanka Preskar PhD, Head of the Regional Units Department of the N. E. Institute (Principal’s Assignments, Authorities and Responsibilities in the Light of System Changes) and Janez Krek PhD, Dean of the Faculty of Education (Education Plan, Action and Law).

International Conference on Learning and Teaching of Mathematics (KUPM 2014)

The 2nd International Conference on Learning and Teaching of Mathematics (KUPM 2014) in the Organization of the National Education Institute was held in Terme Čatež on 21 and 22 August 2014.

The conference took place under the honorary auspices of the President of the Republic of Slovenia Borut Pahor. It was attended by 400 teachers of mathematics in primary and secondary schools, teachers and education experts competencies in mathematics.
The primary purpose of the conference was the presentation of the new and original approaches to the learning and teaching of mathematics across the vertical and for all educational programs. Plenary lectures by invited lecturers, workshops and longer and shorter presentations by thematic areas were held by around 110 authors.