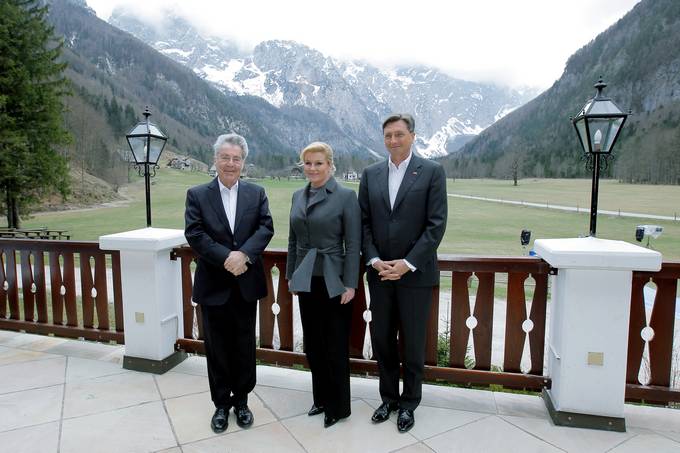 On 17th of April 2015 the trilaterally meeting between the president s of Austria, Croatia and Slovenia was hosted at the boutique Hotel Plesnik in Logarska valley, Solčava.

The head was given to the topic; the meeting of the leaders Brdo-Brioni, which will take place this June in Montenegro. The main topic there will be enlargement of the European Union and one of the special guests will be Heinz Fischer and the president of the European Council.
It was a great honor for Hotel Plesnik to host such an event. The staff carefully prepared to meet the high standards of the Protocol of Republic of Slovenia. Meeting started with photo shooting on the terrace with splendid mountain view and continued with a press conference, where Slovenian president Borut Pahor, Croatian president Kolinda Grabar Kitarović and Austrian president Heinz Fischer commented on importance of enlargement of the European Union.

Hotel Plesnik’s chefs prepared culinary delights that were served in the hotel restaurant. The beautiful surrounding of the hotel just called for a walk along the Logarska valley. Although the weather was not favorable it did not spoil the wonderful atmosphere. The Austrian president that visited Logarska Valley for the first time enjoyed his stay and even made a small joke when stepping outside the hotel: “There is no such thing as bad weather, there is only a bad choice of clothes.”