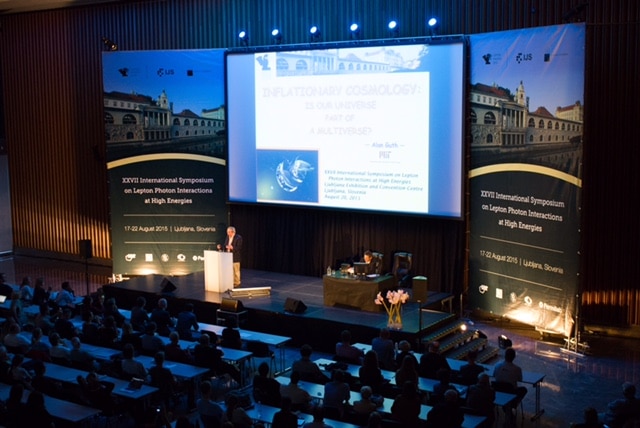 From 17 to 22 August, the Ljubljana Exhibition and Convention Centre hosted Lepton Photon 2015, the 27th International Conference of High Energy Physics. The lecture by the renowned Prof. Alan Guth about the inflationary universe and, consequently, parallel universes raised particular attention.

At the conference with more than 200 participants, established researches presented the newest scientific achievements in experimental and theoretical particle physics, astrophysics and cosmology, as well as their plans for the future. At the core of the events were the latest results of the Large Hadron Collider at CERN, by means of which in 2012 with collaboration of Slovenian scientists the famous Higgs boson was discovered. This is why Slovenia was chosen to host this year’s event, as Dr. Peter Križan from the local organizational committee admitted for the national radio.

All lectures could be watched live on the conference web site. In the Marmorna / Marble Hall at the GR – Ljubljana Exhibition and Convention Centre, even 1300 people listened to the legendary physicist and father of the inflationary universe theory, Prof. Alan Guth.

Flawless technical support throughout the six-day conference was provided by the GR – Ljubljana Exhibition and Convention Centre team. The biggest challenge was to reorganize the hall for 200 participants into a hall for public lecture where over 1000 listeners were expected. In 20 minutes, the GR team successfully rearranged the space, once again proving that the flexibility of the halls and the team is an advantage of the GR – Ljubljana Exhibition and Convention Centre.

Ljubljana enchanted the participants with its beauty and hospitality. They were enraptured with the gift – a bottle of the so called ‘museum water’ conveying the message about the value of water sources – and the invitation to fill it with water from Ljubljana public drinking fountains.

The physicists have already left – to be followed by physicians; the next week, the GR – Ljubljana Exhibition and Convention Centre will be hosting the ESRA congress with 1500 participants.