25 years ago this year Slovenia became the first of the former Yugoslav republics to declare its independence. To celebrate its country’s silver anniversary, the Convention Bureau is bringing some legendary Slovenian energy to IMEX in the shape of an interactive game, “I Feel 25”. Designed especially for the IMEX exhibition, and for its highly competitive, alpha male and alpha female attendees, this digital game will determine the real MICE Mastermind at IMEX Frankfurt.

Miha Kovačič, Executive Director at the Slovenian Convention Bureau, said: “Slovenia is Europe’s great adventure playground with outdoor activities like rafting, hiking and biking all available a mere stone’s throw from our key cities. We wanted to bring a sense of fun and games to IMEX and unleash some of the great competitive energy that defines our industry”.

Tomaž Krušič, Chairperson of the Slovenian Convention Bureau and President of Intours DMC added: “We have 25 specially crafted questions – one for each year of our nationhood – and a leaderboard ranking each contestant by score. We’re inviting all IMEX attendees to compete – hosted buyers, exhibitors, visitors – but we’re sending out a challenge, in particular, to the Executive Directors of the meetings industry associations.”

Finally, Miha Kovačič explained: “There are trivia questions about Slovenia mixed in with questions about the meetings industry – its history, special jargon, associations etc. Thanks to our stand partners we have some amazing prizes too including hotel stays, dinners, activities and, of course, our iconic, much-sought-after “I Feel sLOVEnia” t shirts”.

About IMEX
IMEX is the worldwide exhibition for incentive travel, meetings and events. It takes place annually in Franfurt. In 2016 it runs from Tuesday, 19 until Thursday 21 April.

About the Slovenian Convention Bureau (SCB)
SCB is a member-based organisation the focuses on the marketing and promotion of Slovenia as a destination for business events including meetings, incentive travel experiences, conferences, events and exhibitions. 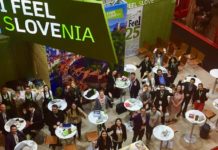