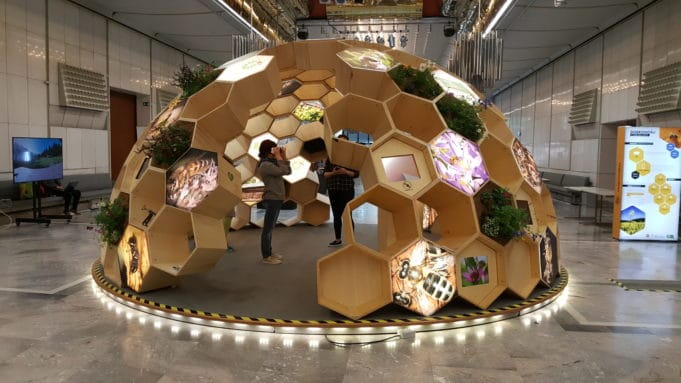 Bees play an important role in nature, and for the survival of humans. In fact, every third sponful of food we eat is dependent on pollination. In Slovenia, people are very aware of their incredible mission, so bee-keeping has strong roots in Slovenian tradition. Blooming meadows and forests are home to the Carniolan honeybee, an indigenous Slovenian sub-species of bees. It is known for its characteristics, such as docility, diligence, humility, and a great sense of orientation.

In 2014, the Slovenian Beekeepers’ Association launched the proposal that WORLD BEE DAY be celebrated. The World Bee Day initiative was supported by the Republic of Slovenia and backed by Apimondia, the beekeepers’ umbrella association. The Slovenian Beekeepers’ Association says on its website that bees, as pollinators, play an important role for humankind in terms of providing food, food security and nutrition, sustainable agriculture, biodiversity, climate change mitigation, and a healthy environment.

On 20 December 2017, the United Nations General Assembly finally declared 20 May as World Bee Day. Every year on this day, the attention of the global public will be drawn to the importance of preserving bees and other pollinators. People will be reminded of the importance of bees for the entire humanity and invited to take concrete action to preserve and protect them and their habitats.

»Bees and other pollinators finally have the place they deserve in view of their importance for the world, for sustainable development and the future of humanity,« sad Dejan Židan, head of the World Bee Day project and Deputy Prime Minister of the Republic of Slovenia.

Slovenia is one of many world’s countries which celebrated the first celebration of World Bee Day. To mark the 1st World Bee Day and the birth of Anton Janša, the City of Maribor prepared a guided tour of Maribor on 18 May 2018.

After the guided tour, the president of Beekeepers’ Association of Maribor Associations, Vlado Vogrinec, presented the historical development of beekeeping in the region. During the day, on the Leon Štukelj Square (Trg Leona Štuklja), the beekeeping market was held along the tasting of honey delicacies, beekeeping exhibition and workshops for children.

Cankarjev dom – Cultural and Congress Centre Ljubljana (CD) in cooperation with the Ministry of Agriculture, Forestry and Food, the Municipality of Ljubljana, the Embassy of Switzerland and BTC plc. organises and hosts the WORLD BEE DAY on 20 May 2018.

This is just one of the examples how CD, among other goals, aims towards environmental protection through pointing out the significant importance of the hardworking and diligent insects.

Beekeeping in Slovenia is a signal of concern for the environment and nature preservation, and CD, the biggest Slovenian congress centre, recongized this some time ago. As a contribution to increasing Ljubljana’s biodiversity, beehives have been installed on the building’s rooftop. Approx. 150,000 buzzing Carniola bees are now pollinating city plants and providing honey as a unique CD product. With urban beekeping on their terrace they are extremely proud on being the pioneer of this kind of Slovenian initiative.

On Sunday, 20 May 2018, visitors of the CD were able to actually see the CD’s rooftop beehives and even taste the CD’s own Honey.

At 7 pm film and post-screening talk, titled More than Honey, by Markus Imhoof in Kosovel Hall were scheduled. More than Honey aims to allow the spectator to understand the drama at play and highlight the pressures of the global economy on the small insects.

The Interactive Pavilion, talk to the Honey Queen, and use VR glasses for a mindblowing experience of a bee flight were available through the day.

Apart from raising awareness on the importance of bees and other pollinators, World Bee Day is also a project aimed at the preservation of our Planet. Slovenia thus prepared for its first celebration of the World Bee Day with a great sense if commitment. Without bees there will be no life.