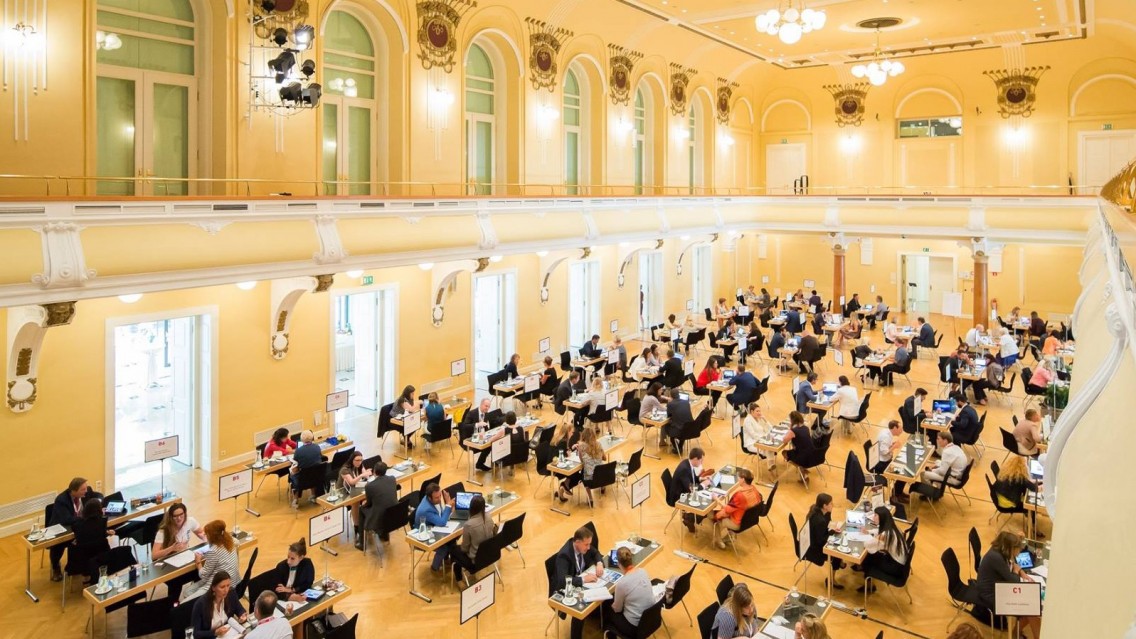 The event was organized by the British company WorldWide Events, which has established itself in the last decade as the host of the prestigious business events in the meetings industry, the M&I Forums.

Ljubljana has proudly joined the European destinations that recently held one of the M&I Forums: Edinburgh, Malta and Vienna (2015), Sardinia, Madrid, Amsterdamand Prague (2016). The additional host destination in the past three years has been Dubai. This year the M&i Forums are hosted in: Disneyland /Paris, Ibiza, Seville, Helsinki and Ljubljana.

During the Forum the hosted buyers are divided into two groups. The bussiness meetings per group of clients are spread over two intense business days with networking activities taking place in the afternoons for all participants. Each of four evening events in Ljubljana was hosted in a different special venue.

Hiša kulinarike Jezeršek provided delicious catering during three evening events, while Hiša Vizij was in charge for the event design, which offered a series of exquisite and light-colored settings for the evening scenes.

Among four evening special event venues two were presented for the very first time, Švicarija Creative Centre and the Fashion house, a former 70s-era clothing store turned special event venue. They hosted a reception and gala dinner for the first group of clients.

Both locations are an excellent addition for Ljubljana. The Fashion house can be described as the “hip-nostalgic” venue, while Švicarija Creative Centre, a renovated wooden guest house from 1935, made everyone feel like in a fairytale. The stunning setting in the middle of Ljubljana Tivoli Park on a late summer evening created a truly fantastic atmosphere.

Ljubljana Castle and the National Gallery, where the reception and gala dinner for the second group of hosted buyers were held, both proved to be magical venues as well.

The musical program during the four Forum’s evenings included the traditional folclore music from the local Mandolina orchestra and a DJ featuring a saxophonist and a harfists. Additionally, reception evenings for both groups of clients were greatly enriched by the visually appealing presentation of Slovenian tourist offer made by theSlovenian Tourist Board.

The afternoon activities took place in Ljubljana city as well as in the region. Since short distances were highlighted as one of the greatest advantages of our country, the afternoon offer included visits to two icons of Slovenian tourism – Bled and the Postojna caves. In Ljubljana the participants were choosing between two experiential guided tours, suitable also for business events – the first combined a cycling city tour with a boat ride along the Ljubljanica river , and the second one was a gastronomic city tour – both were very well received, and the same holds for other two afternoon programs.

A very positive response by the event participants

It was already during the event that the organizers praised the levels of event organization and emphasized the genuine satisfaction by the guests. Almost until the very end the weather stayed sunny and dry, which also helped a lot.

Ms Katie Merch-Chammon, the project manager of the WorldWide Events, briefly commented: “I want to thank you and your team for a great partnership. As discussed in the end, the feedback from the participants on the event itself, the destination and you as partners was amazing! It was really wonderful to work with you – a dream team!”

We believe the Private MICE Forum is an event with great potential, which will contribute largely to the visibility of Ljubljana and Slovenia in the segment of business events.