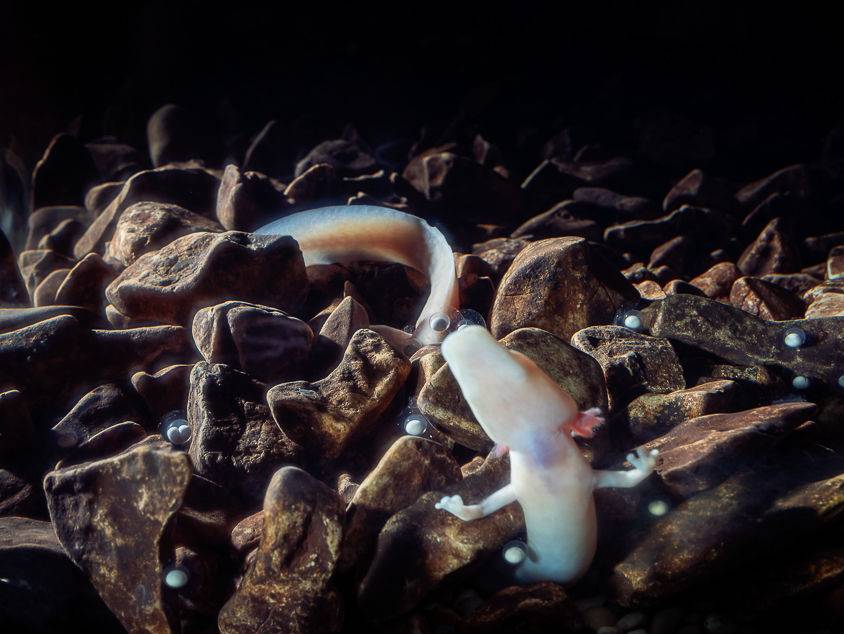 In the largest Slovenian tourist attraction, Postojna Cave one of the female olms laid new eggs this summer. Their development has been very successful and new baby olms are expected to hatch in the coming days! We are about to witness an unprecedented reproductive success rate in the world of olms!

The olm – known all over the world as the baby dragon – is the largest cave-dwelling animal and a precious endemic of the Dinaric Karst, which means that its habitat is limited to a very small part of the world. Olms have always stirred people’s imagination with their unusual, one-of-a-kind features. They are blind, live in complete darkness and can survive without food for years. Their main home and the place where you can meet them is the awe-inspiring Postojna Cave in Slovenia.

Olms caught the interest of numerous scientists, for instance Charles Darwin himself wrote about them, they were researched by the Italian naturalist Giovanni Antonio Scopoli and, as a rather unexplored animal species with the Latin name Proteus anguinus, they keep intriguing the world’s scientific community even today.

And Postojna Cave’s team of biologists, headed by Katja Dolenc Batagelj, has now achieved something that has never happened before. After a one-of-a-kind event was witnessed in Postojna Cave six years ago – the first hatching of baby olms in the 200-year history of Postojna Cave in front of our very eyes – we are about to witness a record-breaking reproductive success rate.

The world’s most succesful cave laboratory

Postojna Cave’s biologist Katarina Kanduč noticed that some eggs were visible in the body of one of our female olms in the Vivarium back in early May. They watched and waited patiently until one day, right in the middle of a visit from a group of schoolchildren, the silence next to the aquarium was interrupted by an innocent, yet big question asked by a 13-year-old visitor, “Are there new eggs?” And that’s how the story of the 2022 Olm Brood started.

Of the 43 eggs laid in early June, they’re now eagerly waiting for the last few of the 32 baby olms to hatch. Statistically, this means a record-breaking 74% reproductive success rate. This confirms the reputation of the most successful cave laboratory, where, according to scientists, baby dragons are provided with optimum conditions for growth and development.

How is this even possible

The team that cares of the baby dragons is extremely dedicated. The eggs, the embryos and the baby olms need round-the-clock care, feeding, cleaning, monitoring, data recording, filming and a number of other things. If necessary, even diving into ice-cold water or suddenly leaving in the middle of a theatrical performance, if the head of the cave laboratory suddenly happens to notice something unusual in the aquarium through real-time video footage, which makes it necessary to rush to the cave and check if everything is okay.

The guardians of Postojna Cave’s olms, who were named the finalist of the prestigious Natura 2000 award, which is presented by an expert EU panel of judges, are slowly discovering new olm-related things. There are countless unknowns that have yet to be uncovered. Earlier this year, the olm guardians witnessed an extremely rare occurrence: twin olm eggs. Empirical research has confirmed some previous assumptions, i.e. that the speed of embryo development and how quickly the olms hatch are impacted by the ambient temperature. If the cave temperature is higher, development takes place at a faster rate.

In 2016, the very first baby olms hatched after four months – this was in a cave area where the temperature is constant at 8 –10 °C. This year, however, the 2022 brood of baby olms,which live in a cave area with a higher average temperature of approximately 10–12°C, took the team of biologists by surprise, when they started to hatch after only three months, i.e. a whole month earlier.

Research into olms and their life is also extremely important in raising public awareness. As a sustainable destination, the aim is to achieve the “sustainable development goals” as set out by the Assembly of European Regions (AER). “We are changing the attitude towards the environment and above all we are educating every single person that that they should care about the environment and clean water. We are starting off with children who come here on school trips. This is why we are so happy that the olm eggs were discovered by a primary school pupil,” says Katja Dolenc Batagelj.